So if you follow me on twitter, you might have noticed the abundance of cat-related tweets of late. It all started on a dark and stormy night a few weeks ago *dum dum duuuuum*…

Ok, it wasn’t stormy, and it was just dark coz it was night, but it was rather cold. We heard a very loud high-pitched meowing outside, naturally ran out to go see what it was, and low and behold, a tiny little baby kitty witty all by his little lonesome selfness! Seemed pretty clear that she’d been abandoned. So of course I had to take her in and be her new momface 🙂

I’ve been wanting a kitten for ages, but wasn’t going to get one because I’ve got 2 cats already, one of which (whom?) is very very possessive and jealous, so I didn’t want to upset him. He’s barely on friendly terms with the other cat, and they’ve been together over 5 years now! But this was a whole new situation. You could even call it a life and death situation, maybe. So I kept the new little critter, and called her Ninja because of her colour and her ability to blend into shadowy or dark-coloured spaces and unexpectedly pop up everywhere. Behold the glory of her unbearable cuteness below. I swear kittens could take over the world if they wanted, just by using their powers of cuteness.

Are you swooning yet? Just look at that crazy kitten-attack-mode face at the bottom! Love it! <3
I’ve learnt that it’s pretty much impossible to take decent photos of all-black cats without flash, unless you wants lots of photos with vaguely cat-shaped empty black spaces.

Next up is Salem. (At this point I must mention that Salem is about 11 years old, so his name is an unfortunate remnant of a much younger, misguided me.) I love this cat so much, it’s sometimes worrying. He is so beautiful, photos don’t do him justice. I shouldn’t have favourites, but I’d be lying if I said he isn’t my favest cat in the world ever. His long fur coat is so thick and gorgeous, and he’s got so much personality <3 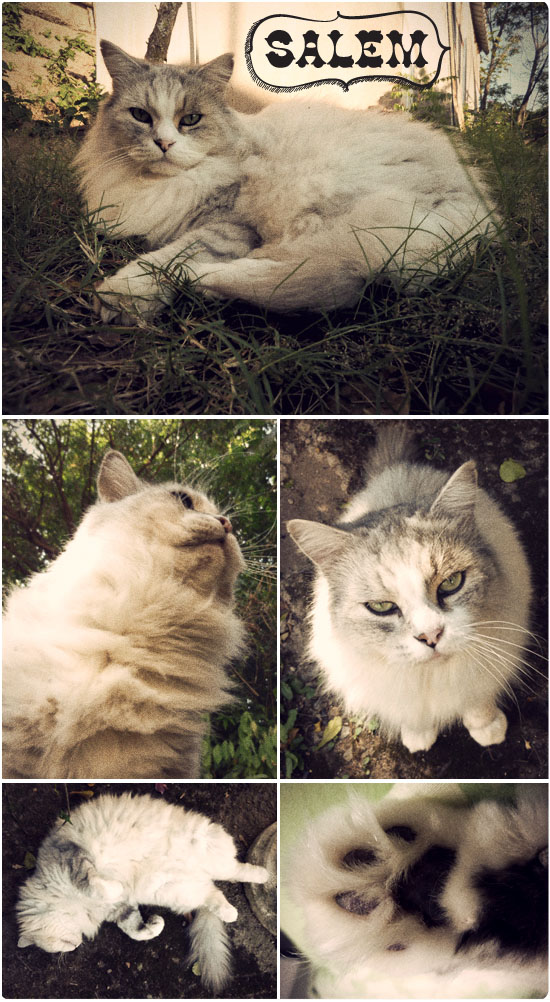 Next up, Garfield. (Another poor li’l guy stuck with a lame name. Luckily, this wasn’t my bad choice…) Garfield was one of those poor kitties who are rescued from the SPCA, only to be given to stupid kids as birthday presents, only to later be kicked out because it turns out that the household was full of moronic douchebags who hadn’t thought through their wonderful birthday plan for their darling brat child. (I feel quite strongly about people like this, can you tell?) Aaaanyway, he joined my home (much to Salem’s intense dismay) and lived happily ever after.

This is what Salem and Garfield thought about the arrival of the little Ninja orphan. I think those facial expressions say it all. But they’re getting used to her… slowly. 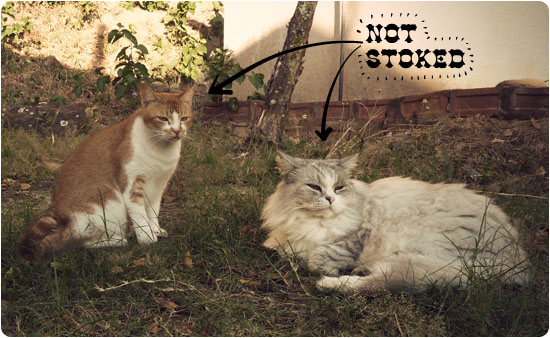 So much cat love! The kitten is also my excuse behind the lack of posts lately 😛